Updated 8:45 p.m. EDT – Added Blizzard’s official release to the bottom of this article.

Congratulations are in order for the final four qualifiers heading into the Round of 16 for the World Championship set to take place ultimately at BlizzCon 2014.

Your Americas region qualifiers are Firebat, Strifecro, DTwo, and Tarei! For a full breakdown of the brackets and how these results were arrived at, check out Liquipedia’s bracket coverage here.

We here at BlizzPro would like to give a special shout-out to DTwo, as he represented Don’t Kick My Robot (DKMR), our partner here on the site whose articles you have probably been reading week in and week out. It’s clear that the teamwork and knowledge stemming from DKMR helped propel DTwo to his top finish and we look forward to cheering him on in the coming games!

We will continue to provide you with coverage from the Americas Qualifier as deck lists and videos of the matches become available. For now, you can check out HearthstoneVODs’ collection of games from this past weekend as they have been constantly uploading the games shortly after they complete.

Sixteen players showed up ready to put their world class dueling skills to the test at the Hearthstone Americas Championship in New York City. After two days of epic Hearthstone action, four talented players have advanced to the Hearthstone World Championship at BlizzCon 2014. Soon, Tarei, dtwo, StrifeCro, and Firebat will join 12 legendary card-slingers from Europe, China, Korea, and Taiwan in the pursuit of glory and a prize pool of $250,000! 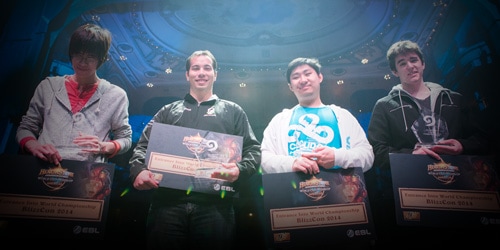 Congratulations to all four finalists! You’ve truly earned your way on the road to BlizzCon!

BlizzCon 2014 is shaping up to be a truly memorable event! Who do you think will win it all at the Hearthstone World Championship?

Leviathan is a top-tier Hardcore player, with several Top 10 Leaderboard finishes during Seasons and also many high rankings and server-firsts for various Conquests. His favorite class is the Crusader and you can catch his stream at https://www.twitch.tv/leviathan111!